Apartment Light Project: Using an LED Step Light as a Kids Night Light - LightUp Skip to Content
Free Shipping on Orders of $99 or More
Rebates up to 100%, Find yours now with our Rebate Assistant!

One of the most important things in my life as a new parent is making sure my son Leo is safe, happy, and healthy. Part of that is creating just the right kind of environment for him in his bedroom. Since we moved into our apartment, I have to admit that I've been a little slow to construct the wonderland that I've been imagining. In fact, even his night light situation, a central component of the safe and cozy little kid's room, has been sub-par. Until now. Recently I installed an LED step light with louvers in his room so that he could have a neat LED night light on a switched circuit. How did I accomplish this remarkable feat of electric prowess? Like this.

I started with a problem that I wanted to solve. I like to check on Leo a few times per night - half because I want to make sure he's all cozied up with his blanket and stuffed buddies and half because I relish these moments that really are fleeting. Before long I won't have the sweetest little angel in the world; I'll have a hulking teenager with gangling limbs strewn across his bed. When I come into Leo's room at night, I'm usually using the flashlight on my cell phone. It's too bright and a little silly. But now I just flip the switch and the installed LED step light with louvers (a.k.a. Leo's cool new night light) glows to life. The light is directed downwards, so no direct light bothers him while he's snoozing. So much easier. I mean, having a night light on a switch is worlds better than having to go flip a switch or plug something in or carry a beaming iPhone flashlight into his room. This is pure convenience, and my wife (who, once again, was not consulted about my home improvement decision), is happy as can be about the new switch-controlled LED night light.

So, retrofitting an LED step light into a electrical outlet gang box is completely straightforward if you aren't replacing an outlet that runs on a switch. My particular outlet is actually half-switched: The top outlet is controlled by the switch while the bottom outlet is always running. This made things a little more complicated, and I had to conduct some research online. My main question: What's up with this red wire? I was expecting to see only green, white, and black. 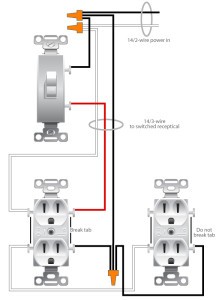 This diagram helped me determine that the red wire I was seeing was the "hot" wire running from the switch, while the black wire was the "hot" wire not running on the switch. The reason the bottom half of the socket was not affected by the switch was that it had constant power coming from this black wire, which had bypassed the switch entirely. The instructions for the LED step light with louvers said to connect black to black, white to white, and green to green. This red wire was complicating things, but thankfully this diagram helped me figure out that I needed to actually connect the red to black, white to white, green to green, and then I needed to cap off the black wire from the wall. This was the end of the line for that part of the circuit. Bye-bye, constantly-powered bottom outlet.

So, now that I was armed with information, I gathered all the tools I thought I'd need and prepared for this minor wall surgery. I gathered my drill, lineman's pliers, wire nuts, electrical tape, and the LED step light. Not pictured is the handheld screw driver, gloves, and voltage tester I later brought into my employ. 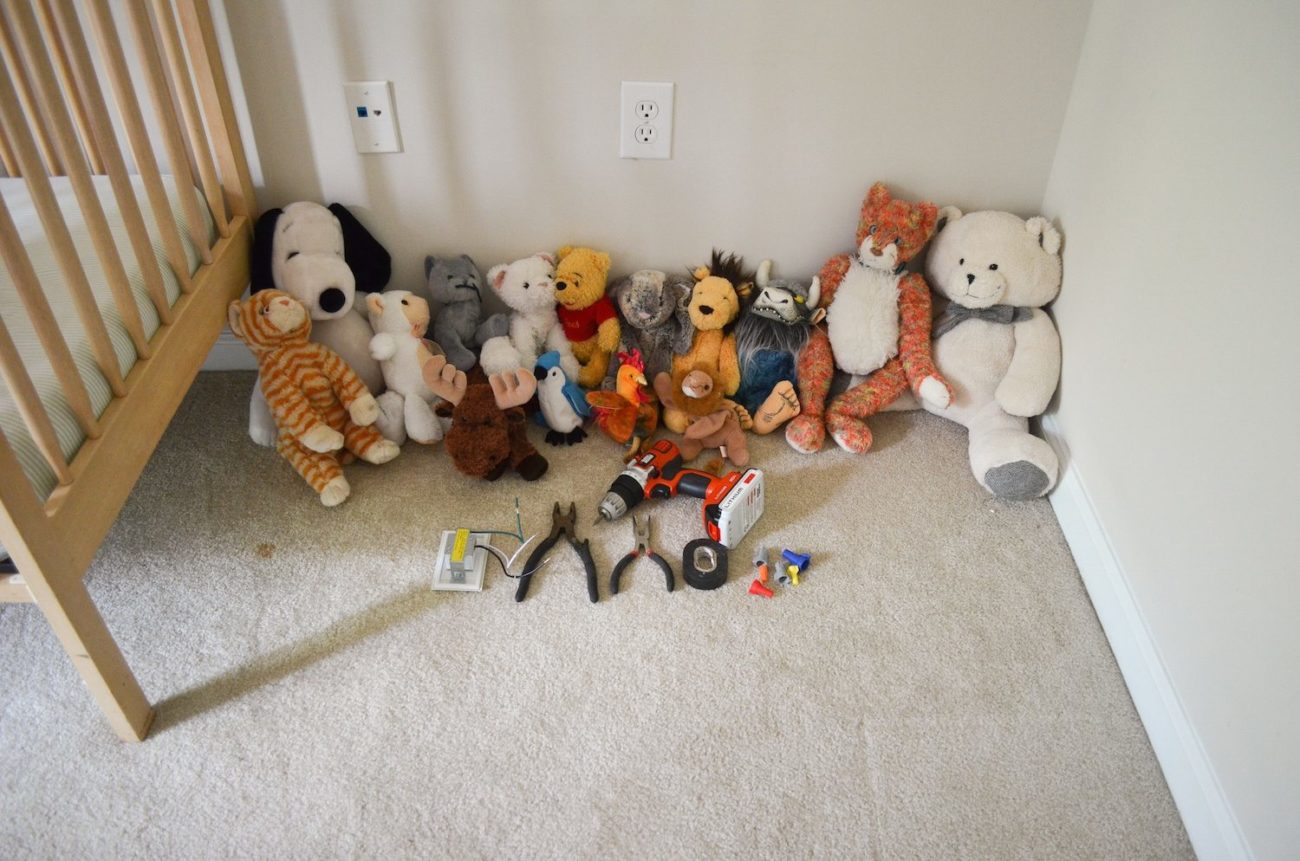 The stage was set. I removed my stuffed animal audience so I wouldn't get them all dusty. I think they appreciated the gesture. Then it was on to Step 1!

Remember: Before even LOOKING at that face plate screw on your electrical outlet, DEFINITELY turn off the circuit at the breaker! It would be a good idea to talk to licensed electrician before you start a project like this. 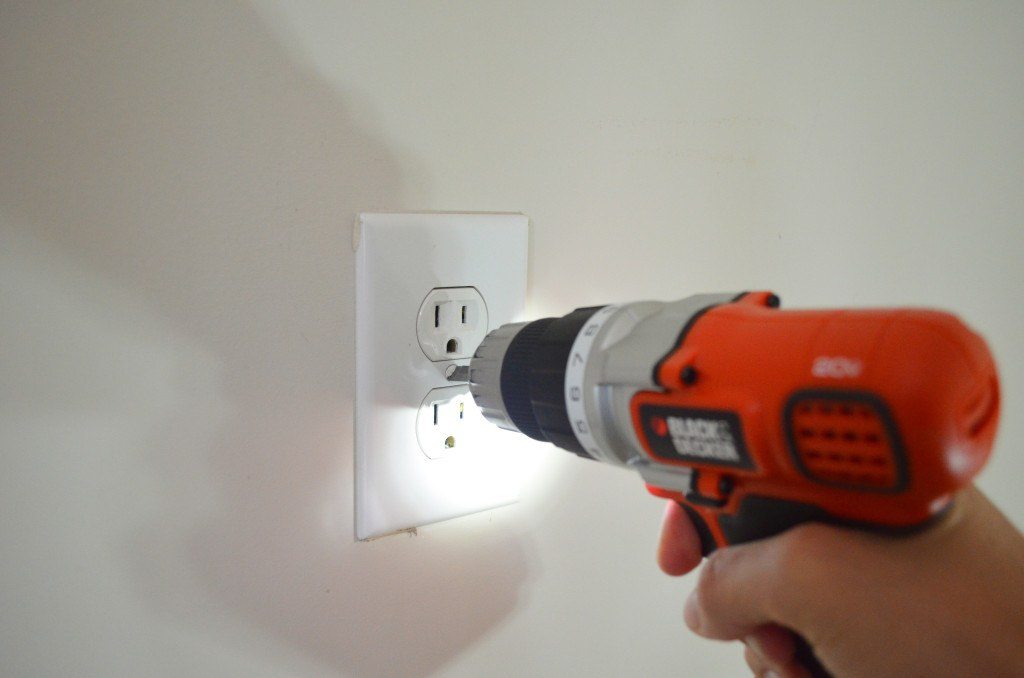 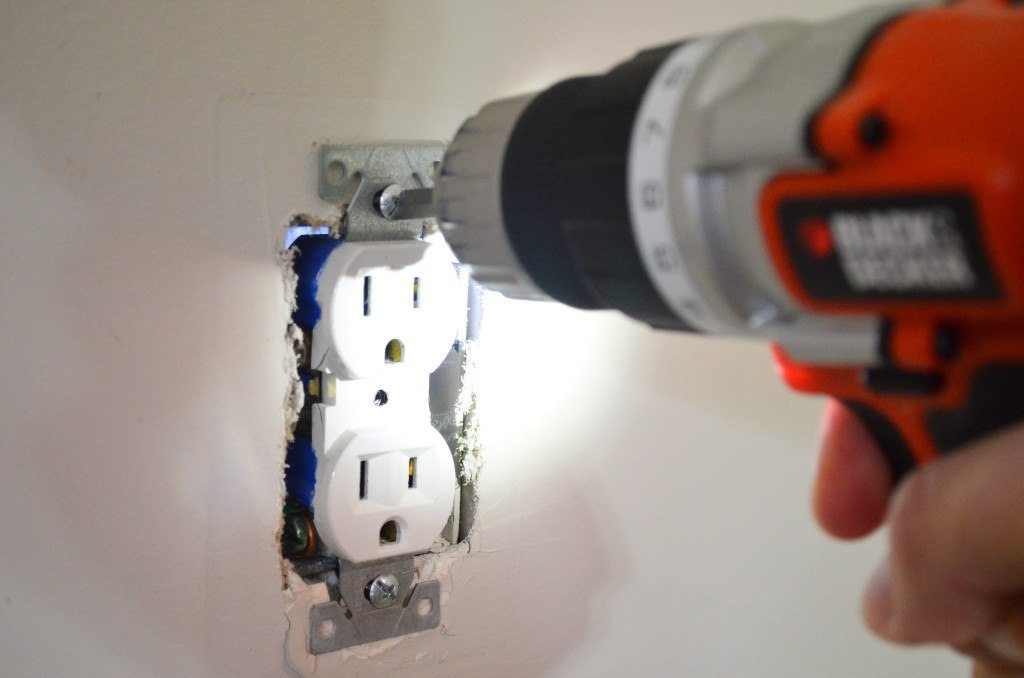 Wearing gloves might make you feel slightly less terrified, even though you know there is no electricity running to this outlet. Also, they look cool.

Step 4: Using lineman's pliers, prepare the ends of the wires to be connected or, in the case of that black hot wire, capped off.

Step 5: Cap off that menacing black hot wire. Do it well. This is very important.

Step 6: Connect the proper wires to the LED step light.

Remember this is as SWITCHED outlet, so for me it's red to black (hot); white to white (neutral); and green to green (ground). Use wire nuts to carefully, thoroughly, and snugly connect wires. (Using electrical tape in addition to wire nuts is optional.)

Then regain your senses and fit everything - the wires, wire nuts, and the new LED panel - into the gang box.

Step 8: Fasten the LED panel to the gang box.

Step 9: Apply the face plate with louvers, take a step back, admire your work.

You may want to re-install your stuffed animal audience around the cool new kids LED night light, just to make sure they approve.

Then, and this is important, be overly proud of yourself and get really excited about your son Leo coming home in a few hours.

Step 11: Tell Leo you want to show him something in his room

Let him squeal with delight as he runs toward the light and commences laying all over his stuffed animals in the warm glow of his cool night light.

And ignore the fact that Leo's pajamas are mismatched. Hey, these things happen. That's just life. And it's pretty sweet, ain't it?

So, there you have it. Installing an LED step light to use as a unique switch-controlled kids night light is an easy project that just might make your life a teensy bit better. Of course, you don't have to have a Leo to make something like this worthwhile. LED step lights work really well as night lights in hallways and, of course, along staircases. Having LED step lights on a switch is, in my opinion, an excellent and energy efficient way to use them as night lights for kids... or adults.