Apartment Lighting Project: Battery Operated LED Picture Light - LightUp
Free Shipping on orders of $499 or More
Rebates up to 100%, Find yours now with our Rebate Assistant!

From the title it is clear that I live in an apartment. Like many fellow apartment dwellers, I am torn between wanting to make my apartment REALLY my own and wanting to make any future moving process as easy and inexpensive as possible. In previous projects I have tackled in my apartment I installed some plug-in over cabinet LED lighting to customize and give a "wow" factor to an apartment kitchen in a way that is invasive to neither your apartment walls nor your bank account. This time I'm taking the no-wiring thing a step further with a battery operated LED picture light!

I love this picture of a golden Native American man with butterflies. While its current hallway location was meant for something else, I have actually grown kind of fond of the unexpected singleness of it. Just one little picture on a hall wall, a picture that's not even meant to hang, something found along some country road in some weird second-hand store back when my wife and I were in our mid-twenties and prone to spontaneous road trips. (I wonder where that ship painting we got went?)

So, instead of putting a larger, more "normal" picture in its place, I have declared this to be its forever home. Well, at least temporarily. Not only am I not replacing it, this picture is getting a spotlight. I am going to celebrate this fun picture with its rough edges and all. How? With a handy, dandy, awesome LED picture light with dimming capabilities.

This battery operated LED picture light is really neat. It takes 3 AA batteries, has six ultra bright LEDs, and is dimmable. You press the inconspicuous button on the side once to turn it on; press it and hold it to let it dim to your desired, battery-saving level; and press it another time to turn it off.

Here's how the golden Native American man with the butterflies looks pre-project: 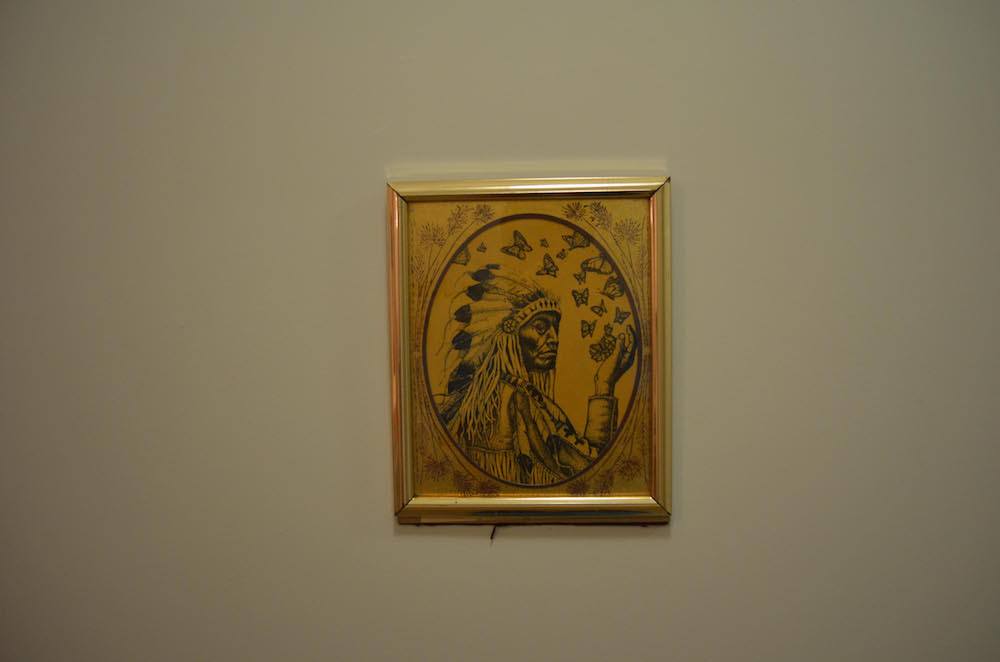 I mean, yes, he is already really cool. But this magical image needs some light to complete the magical effect. The battery operated LED picture light is super easy to install. It consists of screwing two small screws directly through a plastic panel (WITH A LEVEL IN IT) and into the wall. Like so. 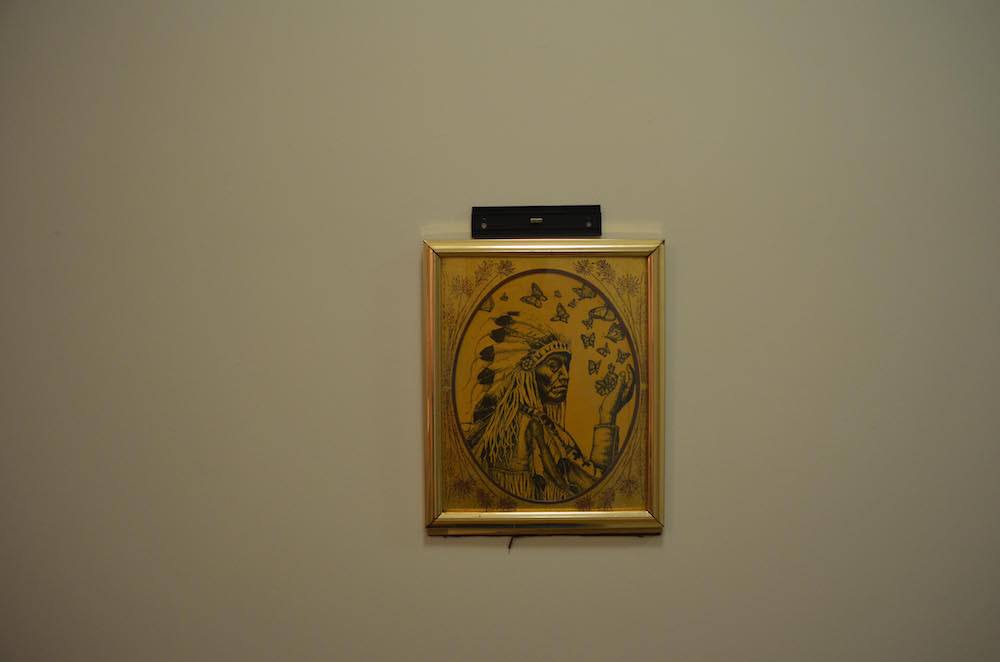 Then, in about fourteen seconds moving calmly, I slid the picture light onto the panel. Simple as that. Boomtown, ya'll. 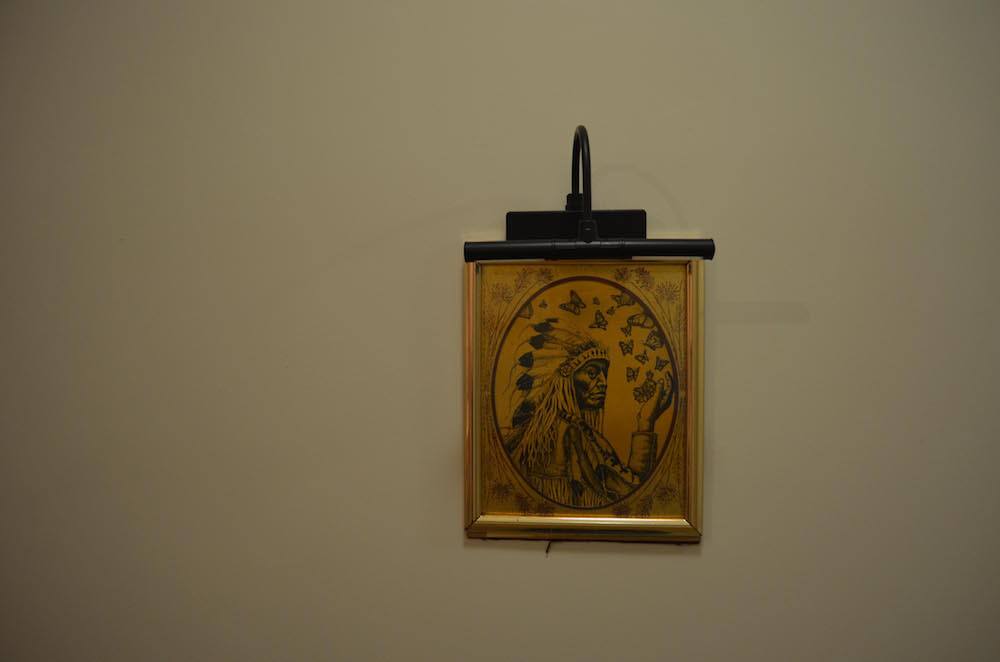 Because we live in an apartment, and because we have a kid, we keep the house dimly lit after 8pm. Our son's room shares a wall with the living room. So this picture light will be the perfect thing to create a warm and cozy environment and keep a low level of light so we can see well enough to, you know, take the dog out and not die. Heck, it even looks awesome during the day! 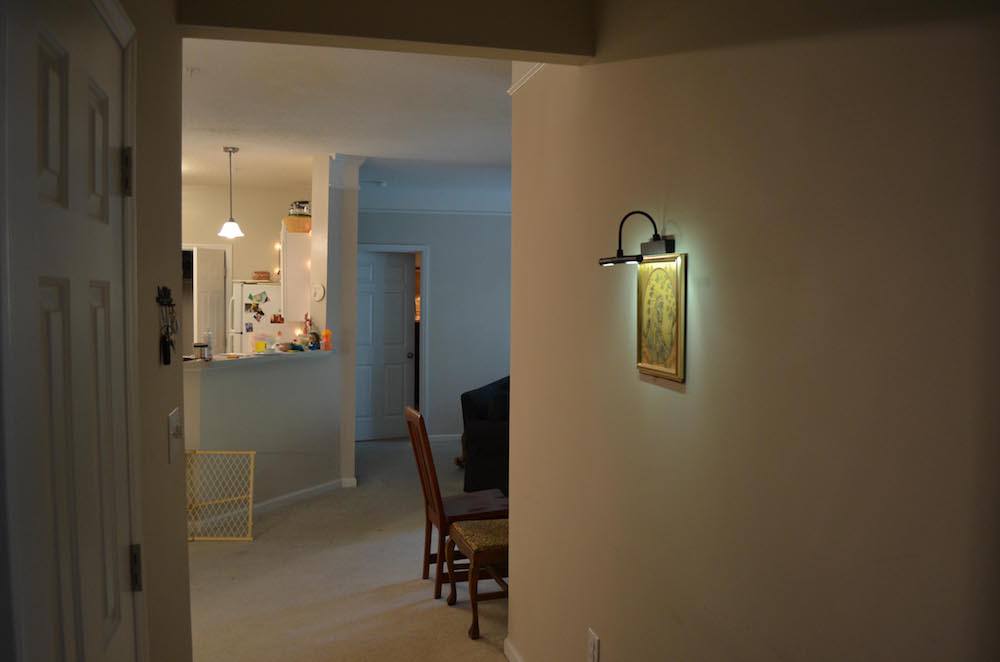